Late last year I became aware that there was going to be total eclipse of the sun and having seen many partial eclipses, I was really wanting to go see this event.  In January, I actually started researching how and what to do to view it.  I went looking for information about where the best place or places would be to go.  The eclipse was to hit the US in Oregon and head towards the Southeast leaving US soil in South Carolina.  My sister and father live in western North Carolina and are about 20 miles from the edge of totality, but travel another 40ish miles south of that point, we would be along the line of maximum totality for that area.  For viewing the eclipse though, this might not be the best place.  Sure, it would be good to kill a couple of birds with one trip — seeing the family and seeing the eclipse.  The problem with this site is cloudiness. We’ve been back there many times and what I have experienced is it’s cloudy most of the time.  I knew that wouldn’t be a good site.

Doing the research on weather for the US in August, the best locations were in the west.  No surprise there.  West of the Cascades in Oregon to the Sand Hills of Western Nebraska.  So, where to go?  We would be driving.  I had purchased a booklet from the Great American Eclipse with maps of the states across the country.  Checking out the pages for Oregon, Idaho, Wyoming and Nebraska there were several towns in Nebraska and Wyoming that looked promising as well as Oregon.  If we were going to Nebraska or Wyoming the plan would be to drive the Denver, overnight, and then either drive to a selected town the morning of the eclipse or get a room in a town in the area.  There was a problem with that plan since, looking for hotel rooms in the area of totality I couldn’t find any rooms available.  Forget the price, none were available in Wyoming or Nebraska when I was checking in January.

So I needed a new plan.

Searching the web, I discovered Solarfest in Madras, Oregon.  The vibe there seemed really good, food vendors, music performances, NASA presentations and a thing called EZ Camping.  I had originally thought about using the lawn or a field on a farm from my sister-in-law’s family who live close to Bend, Oregon.  Bend is about 50 miles south of Madras.  I had sent email asking about us pitching a tent on their property  but before getting a reply I had found out about the EZ Camping. What’s EZ Camping?  Well it works like this.  There were various levels of camping luxury.  The highest was living in a container apartment with running water, toilet, power, living area and bedroom.  Boy that would have been nice, but expensive and all gone.  Oh well.  The next level down was Glamping. That’s short for Glamor Camping.  There were various levels of this as well, based on the number of people sharing a tent.  The levels went from expensive to less expensive. I went with less expensive.  I picked the 2 person option, since we were, you know, 2 people.  After signing up, I found that the tent we would be using was a 4 person tent.  The camping was dry.  This meant, no electricity, no water, pay showers, porta potties.

I have to use a CPAP for my sleep apnea.  The machine requires electricity to work. I had to solve this little problem. Shopping opportunity! I let my fingers do the web walking. I bought the 12 to 24 volt converter from the CPAP manufacturer, then to power it, a 100 watt solar panel and a deep cycle marine battery.  We were all set for our adventure.

We left Tucson on Tuesday deciding to drive through Nevada to get to Oregon. Our first night was to be in Beatty, Nevada.  It’s  the gateway to Death Valley, didn’t you know.  The Atomic Inn, complete with extraterrestrial alien cutouts, was down the street from a Motel 6.  Don’t know which would have been better for the night.

Next morning, out to Tonopah.  Did I tell you that western Nevada is pretty bleak. 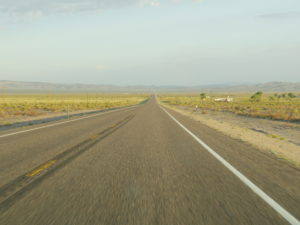 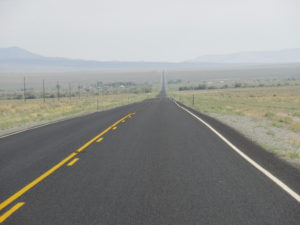 More of the same with this one north of Tonopah.

Another evening spent on the way, this one in Hines, Oregon.  The next morning, we drive to Bend to get the car’s 12K mile service. Then on to Madras.  There are two venues in Madras for the Solar festivities.  We get in a relatively short line at the Solarfest location only to find that we are actually camping at Solartown, north of Madras.  We get there about 2 and wait in a line of cars that we later find is 1.6 miles long and it takes just over 4 hours to get to our camp site. 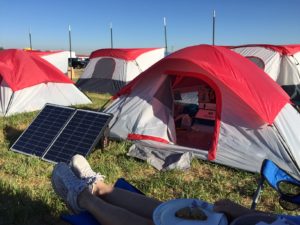 The next day we awake after a 10 hour sleep to take a bike ride southeast of Madras. We eventually rode into The Cove Palisades State Park and hit upon this lake. 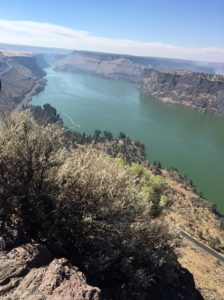 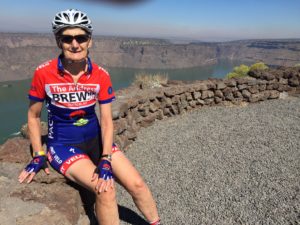 Later that day, after a free shower at the shower trailer, we were treated to another spectacular sunset.  We thought it was going to cost us either $5 per shower or the $30 dollar each pass I purchased for the Madras Aquatic Center.  Oh, well it’s only money. 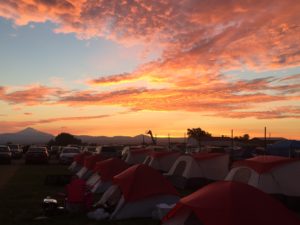 The next morning, nature called at at 4:20 I go this sort of fuzzy picture of the rising Moon with Venus above.  This was two mornings before eclipse morning.  Small sliver of the moon and reddish from the smoke haze. 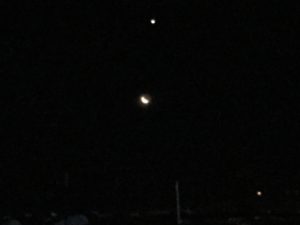 The next day, it was time  for another ride.  This one into town and the Solarfest venue. Wandered around, had lunch, heard a 15 minute talk by a NASA Engineer.  He was speaking later but the line for that was too long to wait for. 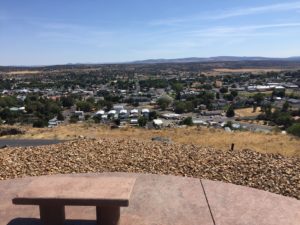 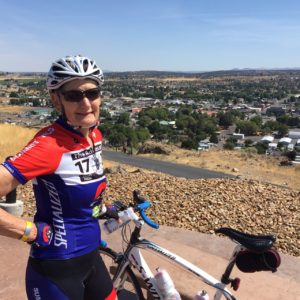 The town of Madras from a lookout west of town with 18% pitches.  Barb made it to the top, but walked some and I made it without having to get off, but twice the front wheel left the ground and I was scared to even stand for fear of falling over backwards.

The next day, we decided to not go riding.  Good thing too, because the water for the free showers had run out.   There were now too many people in the area for the water service truck to get in to service the showers.

A couple in another tent in our line of tents had brought instruments, and on Sunday evening gave us all a little concert.


We discussed when to leave the next morning after the eclipse.  We figured we would leave just after the end of totality.  Each of us, standing in different porta potty lines, I decide we should leave the area before the beginning and get away from the mass of humanity.  Barb, in a much longer line, returns to our camp area, and takes the shot below.  The field south of us, empty until Sunday, is now full to the brim with cars, tents, and RVs. 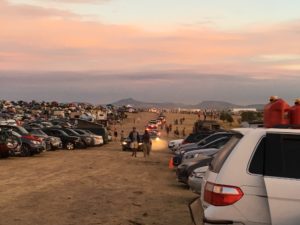 Solartown on Monday morning.  There were probably 10,000 people in our field.  There were another 10,000 in motorhomes on a field west of us and probably 15,000 at the Solartown site proper in Motorhomes 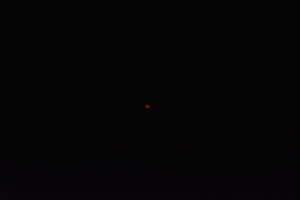 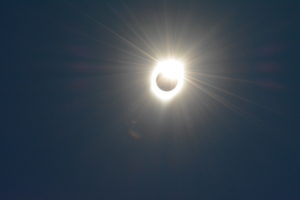 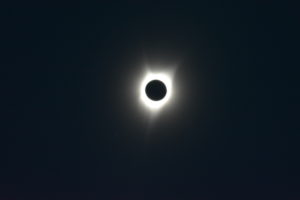 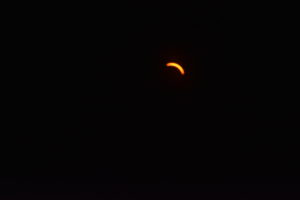 From left to right just before totality, beginning of totality, totality and just after totality. I set a camera that can take movies on the top of the car and got this movie of the landscape on the road we were stuck on for over 4 hours a few days earlier.

Watch for the sky to get really dark just after the 4 minute time mark.  Look for Mt Jefferson on the left side of the horizon.  In the distance you can see buildings at the Madras airport and the tops of the RVs and some tents where we had been bivouaked.  We left about 5 minutes after totality.  It took over an hour to get through the town of Madras, about 4 miles.  On 20/20 hindsight, we realized we should have driven south of town to view the eclipse.  We would have saved the time through town, but probably wouldn’t helped that much. 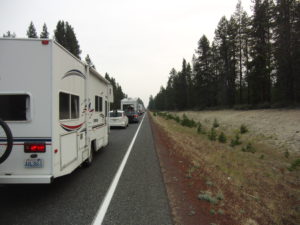 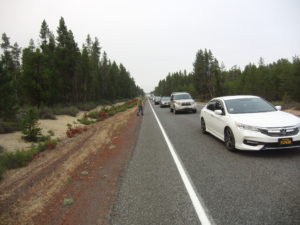 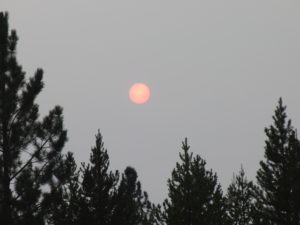 On the road to Klamath Falls, Oregon.  With the fires south of Bend, the orange setting Sun peaked through the trees.  Later,  I got out of the car and walked along the line of cars. I had been driving before and made 100 miles in 5 hours behind the wheel.  Barb made it about 180 miles in her 6 hours of driving.  We were on Oregon 87 and had been in stop and go traffic when we passed the exit for a route backtracking to Eugene.  We had a reservation near Lake Shasta for the night, but realized there was no way in this traffic we would get there the same day, so we canceled that and decided to go back to Eugene to get out of the traffic. 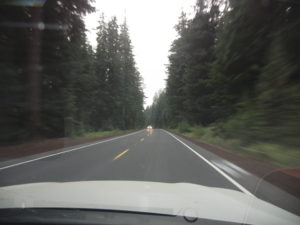 Once we got onto that road there was at least line of 5 miles of cars waiting to get onto 87.  Traffic in our direction was non-existent.  We were traveling in the Stanislaus Forest with 100 foot plus trees. So onto Cottage Grove, Oregon south of Eugene. In the wrong direction but making great time.

We spend the night and the next morning we are on our way to Fresno.  Stopping in Stockton at a Costco for gas and their $1.50 Polish Dog and soft drink lunch.  Of course, we HAD to have one of their Strawberry Parfaits. 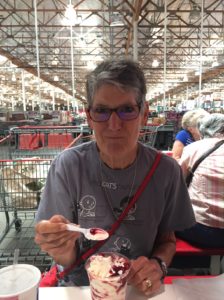 After a night in Fresno, it was back to Tucson.  It was a great trip.  Long, 2881 miles, but worth it.  When you are stuck in traffic, you have to go with the flow.  There’s no point in getting mad at the drivers not filling the spaces when you think they should, because it just doesn’t make that much difference.

1702 is a Restaurant and Craft Beer Bar located 1702 E Speedway. It’s open 7 days a week. Please stop by and have a slice of great pizza or a Craft Beer. Check them out on the web at http://www.1702az.com