Mt Lemmon 2017. I started using the mountain for training again this year. It seemed important to repeat the kind of rides Gary started last year. Gary had a Saturday ride that started at River and Campbell. The general route was Northwest to Continental Ranch. Most Saturdays a group from 4 to 10 went on this ride. Pretty successful. Some things have conspired to make it less popular. I thing the biggest reason is the construction work related to the Ina Road I-10 Interchange work. It’s really messed up any reasonable routes for a good Northwest ride.

So what to do? Try to get a Northeast Saturday ride going. I know that folks think that riding the mountain or ascending any large hill is something to be avoided. I used to think that as well. I’m a heavy rider, gravity works against weight. But the same gravity can help build strength too. So why not use the mountain to help build strength. Starting 3 weeks ago along with Jim Ostrem, John Bailiff , Craig Croxton and Barb, we ascended Lemmon from the 7 Cataracts View Point, each at our own pace.

The subsequent weeks saw only Barb and I accepting the challenge. This past weekend I decided to take a few pictures to record the visit. Before the beginning of the ride, we were talking to another cyclist who was looking at a 325i BMW that I had parked next to. I noticed there was some minor fender damage on the left front which resulted in missing part of the bumper cover and some scrapes. The other rider was saying there was more damage Barb and I hadn’t noticed, as it was on the other side of the car. Shredded tire, slightly bent rim, many scratches and a slightly bent fender. I looked and then confirmed what I thought would have been a 3 series by looking at the tail end of the car. Then the biggest surprise, it had a drive away license plate with a due date of the middle of this month, so this used car had been the property of the new owner for less than a month. Didn’t see any fender parts along the road and still can’t figure out how the collision would have happened.

In any event, my coach, Rob Fleckenstein, said this week I was supposed to be off the bike or easy rides. So, unlike past weeks when I went up to the Palisades parking area, 10 and a quarter miles and 2500 feet of climbing, I only went to Geology Vista.

Barb was a little tuckered out, but then asked do I really have to look like I liked the ride? 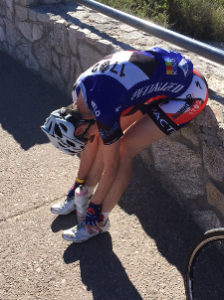 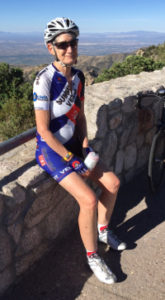 We’ll be riding up Lemmon next Saturday. Watch for the email announcing the time. Hope others will join us. It really is fun.