The USA Masters Games has had it’s third edition.  The first two being in North Carolina, Cary and last year in Greensboro.  This edition was scheduled for San Diego.  It’s an Olympic style festival with all sorts of sports, including cycling.  How could I say no when it was so close and different from what we have in Arizona.  I signed up for all the cycling events back in December.  On the schedule were a Crit, a TT and a Road Race.  Shortly before the start of the three days, I received an email that the Road Race had been changed to a Circuit Race.  Seems that the organizers couldn’t get a permit for the Road Race in the city or county of San Diego.  Go figure.   The first event was the Circuit Race at the Qualcomm stadium.  The course was .8 of a mile with a lowish valley running through the middle left to right with the main course running north/south.  The slope of the parking lot was such that you could get a good head of steam heading in to the left hander at the bottom of the course, but not steep enough to sap energy going back to the start/finish line.  Here’s a view of the course:

The start/finish line was near were the red squiggly line is on the right. Our race group was 65+ to dead with what turned out to be only 2 70-74 folks.  After about 2 laps a guy takes off the front, and shortly a rider bridges up, but after a couple of laps drops back to the pack, with the single racer out in front.  A Prime is called for the pack, with the award being a jar of Nuttzo peanut butter. I’m on the front having a good time and no one challanges me for the butter.  The announcer calls out my number and name, butchering my last name, and I then realize that the racer that went off early is actually in my age class.  Of course he’s probably a 1/4 to a 1/3d of a lap out in front.  I realize there’s not much of a chance that I can make up the ground.  Second’s not bad.  Anyway, about 3 laps later there is another call for a Prime for a multi-tool so I go for it and get that one as well. I figure if I can’t get a first, I might as well the the merchandise.  The race proceeds on, and by the last lap, the flyer is about 150 yards back of us but won’t get there to lap us.  I get a second, felt pretty good about it actually and am not dropping dead from the efforts.

The next day is the TT.  We had driven the course a couple of days previous and knew the distance wouldn’t allow for just an out and back.  Turns out it was 4 times around the circuit.  The interesting thing about this course was at the top end, we had to negotiate a clover leaf turn and come back down the 4 lane highway, to the road where the start was and cross back over to do it all over again.  If the overpasses weren’t enough there were two smallish hills between and this was not a set it and forget it, gear situation.  Here’s a view of the course: 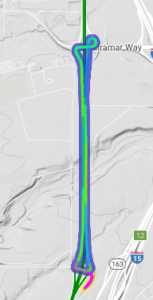 Since we had checked out the course in the car earlier I thought my time would be much longer than your usual 20K TT.  Turns out that like Sonoita/Patagonia, going down hill helps going up hill and my finish time was right there with my times for the usual flat 20K TTs we have in Arizona.  This day there was another person in our age group.  He missed the previous Circuit Race due to work problems.  The TT winner was the same guy from the day before, with the new guy  right in between our times.  I was about 3 minutes slower than the winner.

The last day was a pretty conventional 4 corner Crit in an industrial area with wide smooth roads. This was also the USAC Southern California District Championship race.  With that, I figured we would have a large field and it was larger than the Circuit Race but not by any means huge.  I think we picked up maybe 6 extra riders.  The field was that same as the Friday race 65+ to dead.  In my age group we had an additional 2 riders.  I had been warned about one of the new guys, `The Sprinter’.  Everyone was well behaved during the race, and it was billed as a fast course, and it was.  Hanging with the pack wasn’t a problem again, but we were seeing speeds of 24+.  I finished with an average speed of almost 22.  With about 6 laps to go I decided it would be interesting to see of I could tire some of the folks, so took a flyer for a lap.  Didn’t tire anyone in my group out much.  Got back in the pack and recovered.  Didn’t win any Primes in this race. With a lap to go was positioned pretty well, and the pace really picked up.  I was behind the 3rd place racer in my group as we were midway through the lap, but could not make up the distance and get that 3rd place in this race.  Even so, I raced well, and again was not dropping dead from the efforts.  Had a fellow racer come up to thank me for the lap I went out on and complimented me on my bike lines and riding style.  Nice.  Here’s a view of the course with the start/finish just before the upper right corner: 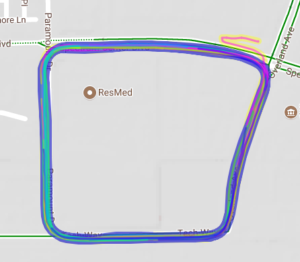 You know we say the bike racers are nice folks, once you get to know them.  Before the race even started the guy that had beaten me the previous two days, came over to Barb and I with a back of veggies from his garden.  We had the tomatoes tonight with the salad we all enjoyed with our friends from Chula Vista and Coronado.  They tasted great and I wish I was gardening again.

The guy that kept beating me was a fellow from Escondido, Hylton Murphy.  Great guy, same race age and we are now Strava followers.  He’s been racing much longer than I and really strong.

Before this weekend, I was thinking about just riding for recreation.  I’m reconsidering that now.

← Just to Windy
What’s this about rain? →